We finished decorating the house for Christmas today. We definitely had to rethink everything we put out last year since Owen is such a curious toddler.

We decorated with our ornaments a little differently to avoid broken glass and the inevitable ornament hook in the hand.

everything’s a little simpler….and a lot higher off the ground!

Our tree sans ornaments….still looks pretty good I think. Owen did go over and pull off one of the ribbons tonight…..so we’ll have to keep a close watch on him until he gets bored with it.

We’re wrapping presents and putting them in our closet since he would definitely go to town unwrapping them if we put them under the tree now. We’ve got our Black Friday haul spread out on the floor of the bedroom to be wrapped. I’m off to wrap, wrap, wrap so I can find my bed later!
Stay tuned for our Thanksgiving post….it’s one you don’t want to miss!

We were fortunate to have a nice break from work this past week. I was off the entire week and Chris was off Wed-Fri. Chris worked on finishing the deck at mom and dad’s house every spare moment he got so Owen and I had lots of quality time together. The weather was nice and we had a great time.

We went to the park one afternoon and had a blast. Owen is big enough now that he can climb the stairs to the little kid slide and go down it all by himself….which he did about 30 times! He had a blast climbing and running everywhere. 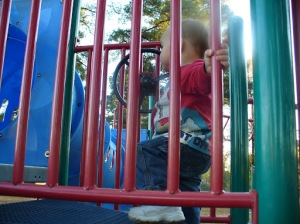 He spent several minutes trying to move the leaves from inside the barrier to the grass below. I see little hints of OCD creeping in already….

this picture truly captures the fun he had on the slide 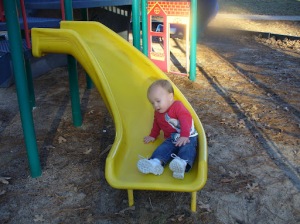 We played outside at home one day with the wagon and trucks. Owen is so independent these days so he didn’t want any help bringing his wagon from the garage 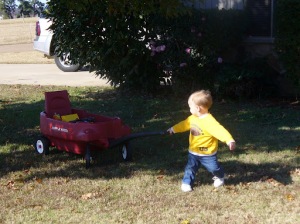 Owen likes to play with Chris’ hats and fortunately for him Chris has about a million all over the house!

We had a little coloring time before lunch one day. Owen was more interested in pulling the crayons out of their holder than actually using them.

We had such a great week together and we’re counting the days til Christmas Break so we can have more fun and adventures!

We all passed around the stomach virus the week before Thanksgiving. It was the sickest I’ve been in as long as I can remember. There was one day where we all three were at the worst of it and I wasn’t sure we would survive. We made it through just in time to celebrate Thanksgiving (more on that later). While we were holed up in the house I got these funny shots of Owen.

I know I’m biased but he is just the cutest thing ever….who couldn’t love that face!?! 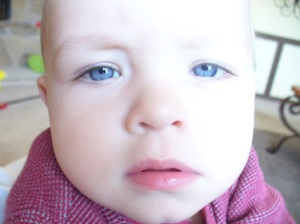 look at those chunky little legs!

It’s been awhile since the last post so I’ve got a lot to post and catch up on. Here it goes….

Lately, Owen is very interested in “helping” out around the house. He unplugs the vacuum (when he considers the job finished), closes doors (even if you’re standing in the doorway), brushes his hair and teeth, helps wash his body in the tub, and even sweeps the floor (as seen below). 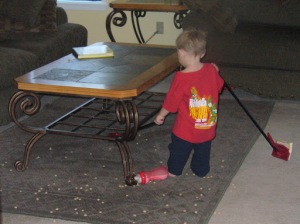 those are cheerios that he poured out so that he could “clean up”
This picture was taken the day the stomach virus hit our family (one of the many reasons it has been nearly a month since the last post).

Owen is an incredibly picky eater so we’re constantly searching for new things to add to his menu. He occasionally will eat mac and cheese so we got some Easy Mac cups for Connie to fix him at lunch. He was eating his mac and cheese while I cleaned up the kitchen and when I turned around this is what I found….

As I mentioned previously, Owen is a picky eater…until it comes to desserts. Like all kids, he really loves sweets. So, we compromised and let him try Nutella on his toast. As you can see, it was a hit!

Despite the fact that he’s such a finicky eater, he’s still growing like a weed!

What a difference a year makes! This teeny tiny picture (sorry, I’m terrible at computer stuff!) is Owen and his friend Hudson on Halloween last year. 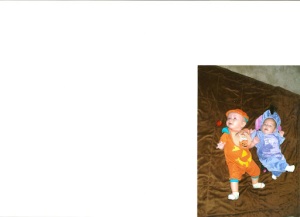 Here are Owen and Hudson this year(with Hudson’s mommy Amanda)!

I’ve uploaded quite a few pictures from our fun-filled night. Unfortunately, I still haven’t figured out how to make them load in order so these are a little disorganized. Pretty much everyone knows by now that Owen dressed as Batman. Chris (with a little help from me) transformed Owen’s wagon into the Batmobile so Owen was riding in style tonight! 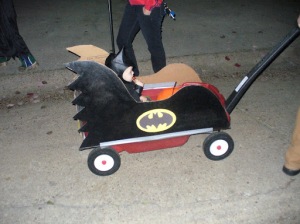 Owen loved being with the other kids and getting candy!

Suckers are his new favorite treat!

He really enjoyed seeing all the neighbors 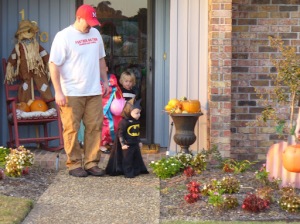 his costume and Batmobile got lots of attention

posing for some pics before heading out for fun! Here is Owen with Marley, Reece, and Will. 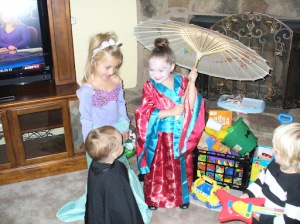 Chris was so proud of his creation so I had to add a few more pictures of the Batmobile. 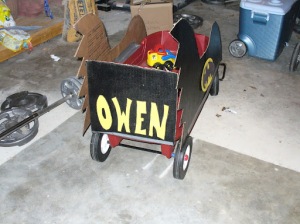 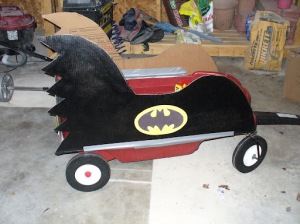 Isn’t he the cutest thing you’ve ever seen!

Batman taking a timeout for a Cheeto Puff!

Hope everyone had a safe and happy Halloween!

As I mentioned in a previous post, little Owen has been sick this week. The first few days he was just a pitiful sight! He stayed in his pjs, didn’t want to eat, and just wanted to be held. His favorite snack is Cheeto Puffs. He’ll fight you for a Cheeto Puff! He normally loves to share all food with Emma but if she steals one of his Puffs, he loses it. So, here are a few pictures of the pitiful little man enjoying his Puffs.

he looks a little crazy-eyed in this one! Could be all that medicine…

check out the amount of cheeto cheese on his face!

I love this one! It’s his tough face! 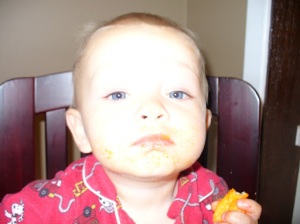 Cheeto Puffs make everything all better! 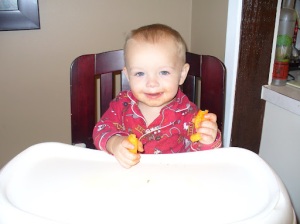 So, when you’re having an especially rough day…enjoy a few Cheeto Puffs…they make everything all better!

There was a traveling animal exhibit set up here in town last week. It was free to go and look at (and pet) lots of animals so, of course, we had to check it out. They had a tiger, kangaroo, monkey, goats, llamas, camel, etc. Owen loves animals and he had a great time. Here are some pictures from our visit.

Owen thinks all animals should respond when he points and says “sit!”. Here he is with Aunt Missy telling the camel to “sit!!”

He has a special fondness for goats since we have some near our house that he has spent a lot of time looking at. He really enjoyed petting these little goats and touching their horns. 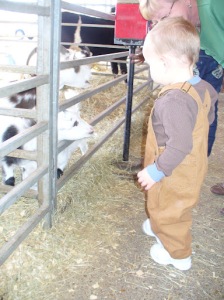 I think he would’ve climbed on in the pen with them if we let him!

He found the llamas especially entertaining and kept coming back over to them to take another look.

Owen really enjoyed looking (and petting) all of the animals. He has a new animal puzzle that makes the animal sound when you put the piece in. So, we’ve spent alot of time this week working on animal sounds and names. He occasionally says “shee shee” when looking at the sheep and he can quack like a duck. Too cute!

I’m so behind on the blog so here’s the first of several catch-up posts. Owen had his 15 month checkup last week (he’s actually 16 months old now). He weighed 25 lbs 8 oz and was 30 inches tall. He got three shots (one in the leg and two in the arm). It was the first time to have shots in the arm which did not go well. Conveniently I had to work, so Chris took him to the appt. Usually, he’s cranky and feverish after immunizations but I swear they gave the child a turbo booster because he has been more verbal and crazy since that day! Unfortunately, he got sick two days later which is why I’ve been absent from the blog. He had fever and was just miserable the whole weekend so I took him back to the doctor on Monday afternoon. He had an ear infection (his first), a sore throat, and chest congestion. After several days of routinely doping him up with antibiotics, cough medicine, tylenol, motrin, and Vicks he has rallied and made a complete (almost) recovery. He’s still coughing a little but it certainly isn’t slowing him down! I really think he’s trying to make up for lost time because he’s been getting in a little more trouble than usual the past two days. Here are a few pics of the big boy!

sitting on the fireplace…a major no-no!

standing on the fireplace….a definite no-no! Check out his big belly! He had just eaten a big meal and he looked so funny with his belly poking out so much! I know he looks a little homely with pj pants and sandals at the end of October. He is obsessed with shoes these days and will routinely bring different pairs of his shoes for us to put on him. So, he spent a lot of time wearing these sandals that day.

having “man time” with Chris….notice they both have on plaid pj pants! “Man time” usually involves wearing hats, playing with the guitar, watching ESPN, and wrestling.

Stay tuned for pictures from the animal exhibit and Halloween!