We’ve had a very busy weekend packed with BBQ, swimming, and fun in the sun! Here are our latest adventures:

swimming with the boys…..Owen and his two friends Hudson and Cameron

Owen with Uncle Josh….the longest he sat still for the past three days!

Our little water baby! He loves “Reggie the Crab” and we can’t go anywhere without our shovel and rake…..

he won’t wear a hat for more than a second these days but he kept this hat on most of the day…..who knows why!?!

this weekend Owen has really taken his walking skills to the next level. He walked all over the place at Missy and Josh’s on Sunday and has walked a little farther each day this weekend…….he’ll be running at top speed by his birthday and I don’t think any of us are ready for that!

checking out the pool at Missy and Josh’s……

playing with my buddy Cameron…..

We’re so proud of Owen because his picky eating seems to be a thing of the past. He’s eating so much now and is generally willing to try anything once. We go days and days without breaking out any baby food….he’s becoming such a big boy! Despite the look on his face in this picture, he actually loved the canteloupe and ate a lot of it…… 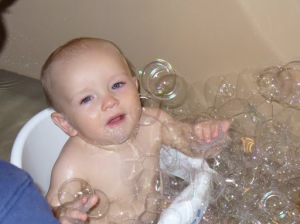 Owen has become quite the helper these days. He kept himself very busy playing with the boxes of toothpaste when we came home from Wal-Mart 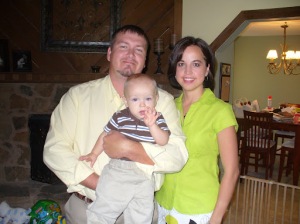 Owen’s absolute favorite new food is chicken. He’s definitely going to be one of those kids who can eat their weight in chicken nuggets. Papaw has spoiled him and makes him his own chicken nuggets with Panko bread crumbs. The rest of us don’t get that kind of VIP treatment. I have to admit that I’ve stolen a few bites of the chicken nuggets when Owen wasn’t looking!

When Owen had rotovirus he became accustomed to hosing off in the sink (you can get the picture without any more detail than that….yuck!) so now as a treat we hose off in the sink sometimes. Like I said before….he’s become quite the helper!

Here he is cleaning the floor…..now if I could just get him to pick up his toys and put the laundry away we’d be in business!

He’s even a happy helper!

Owen is officially 11 months old (as of Sunday). Time definitely flies when you’re having fun! His big birthday will be here before we know it. Every day is a new adventure with new skills and giggles to go along with it. 6-12 months is definitely more fun than those first 6 months. We’re going to the lake this next weekend so stay tuned for pictures of Owen’s first trip on a boat, camping, and swimming in a lake! Hope everyone had a great Memorial Day weekend!

Owen’s feeling much better after battling rotovirus for a week. He’s gained back the weight he lost and then some. He’s also decided to start a new phase of troublemaking. You can see it in those big blue eyes the moment he wakes up in the morning….he’s on the hunt for trouble! I think we’re constantly running after him saying “stop”, “no”, “put that down!”, “don’t eat that!”. It’s exhausting. Despite all of his troublemaking, we love him to pieces. He’s loads of fun and every day is a new adventure!

Here he is performing routine maintenance on his car. He spends more time working on this little car than he does pushing it around these days. He’s very interested in how things work. We may have a future engineer on our hands!

This picture captures what may be the explanation for his tantrums and troublemaking…he’s S-P-O-I-L-E-D. This mound of toys is living in our living room since Nonnie and Papaw are living in Owen’s room for the time being. As soon as they get in their new digs, these toys are going in a toy box in his bedroom. Despite all of these toys, he’d still prefer to play with things like lamp cords, window blinds, dog bones….. 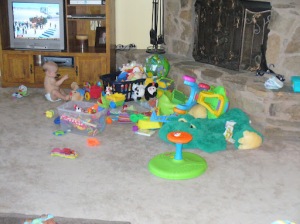 Here he is dumping out the wipes…a new fun game he’s devised.

“helping” with the laundry…..

sampling Annabelle’s dog food…..in case you’re wondering why there’s dog food in the bedroom…Annabelle’s on a very strict diet so we have to feed her away from Emma

the therapist in me is constantly on the lookout for “red flags”. So, I’m a little concerned that Owen has an aversion to books. He’ll play with his books and loves his “That’s Not My Bunny” book but he rarely tolerates being read to. So, this is a rare moment where he was reading a book one morning before going off to Connie’s.

Other new and exciting firsts to report include two new teeth! His two front teeth are coming in. So, now he likes to open and close his mouth to feel his top and bottom teeth touch. It’s pretty hilarious. We’re working on weaning him onto regular food slowly but surely with the plan to have him completely on table food by mid-summer. Today, he sampled a scrambled egg and a little bacon and decided that those were his two new favorite foods. I’m ready for him to be able to eat “big boy food” but not looking forward to making him something to eat all the time. It’s so nice to just open up a jar of food at mealtimes. So, that will be something to get used to. Today (just in time for mother’s day) Owen FINALLY started making the “mamama” sound. It’s been weeks and weeks of “dadadada” (much to Chris’ delight!). So, there’s hope that “mama” will slip out of that little mouth before much too longer. We have the Blossom Festival next week so stay tuned for pics of his first trip to the Blossom Fest!