We want to wish Grammy a Happy Birthday today!  From two of your favorite Arkansans!

We’re still having days of blazing heat and temperatures near 100 or higher but we’ve had a few cooler days mixed in to help us through this last heat wave.  Last Friday we had a cool day which was perfect timing for a playdate.  We had the best time playing at a friend’s house all afternoon with some of our friends.  The boys were all too cute having their lunch at the picnic table.  Little brothers on the left…big brothers on the right.  Loads of fun!

I LOVE Pinterest and am totally addicted!  I spent the entire weekend making new recipes that I have pinned.
SPICY cilantro lime shrimp with cilantro lime rice…it was AMAZING!  Chris declared it was the best meal I had ever cooked.

Saturday morning I made Hootenanny for breakfast.  It’s another Pinterest find and everyone loved it. 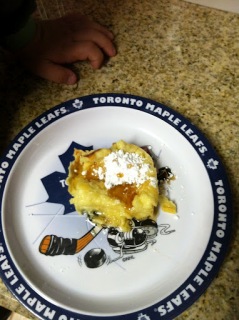 Saturday night I made Brown Sugar and Balsamic Glazed Pork Loin that I cooked all day in the crockpot with lemon asparagus and sweet carrots.  I also made Pumpkin muffins from Pinterest that were awesome.  Sunday I made Homemade Pizza Rolls which were also a big hit!

Look who got a taste of his own medicine…..

I’m just now checking out some new Blogger updates so it’s taking some getting used to.  I definitely like being able to upload more than 5 picture at a time but I was used to having to upload them backwards to make them appear in order.  Now, you don’t have to do that but I didn’t realize it until I uploaded these pictures so bear with me!
This past week was the county fair.  We had a great time but were all fair’d out by the end of the week!
Working backwards here….Saturday night we took the boys to the Ultimate Bullriding Challenge.  We all had a great time and they loved watching the cowboys.  Chris took Aiden home after the bullriding and I stayed and let Owen ride a few more rides before we called it a night. 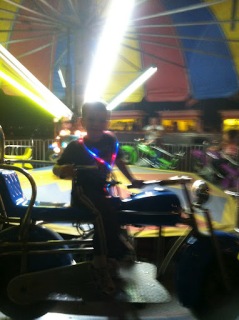 The next few pictures are a series of Owen’s dancing moves as he tried out his glowing cowboy hat necklace. 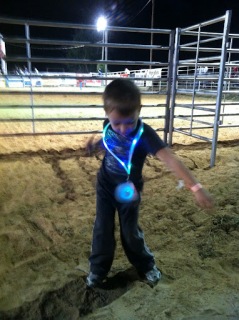 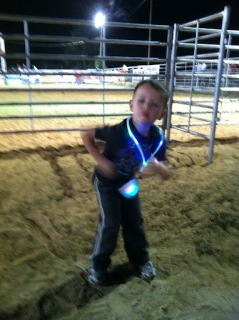 The boys made fast friends with some other kiddos who were watching the show. 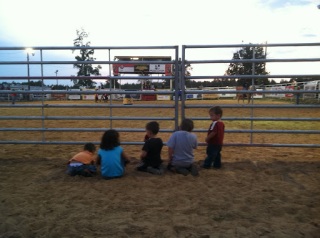 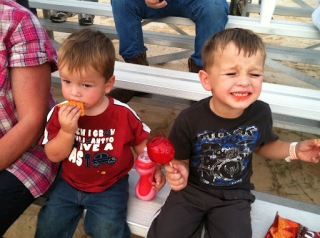 Aiden is not the daredevil that Owen is so he had no interest in riding any rides.  He actually wanted to ride the carousel but as soon as I put him on the horse he got upset.  He ended up riding with one hand on the horse and the other hand death gripping my shoulder.  This is the look he had on his face the entire time. Priceless!

Owen checking out some ducks.

Aiden LOVED the animals and squealed and yelled at them.

{This one makes me smile} 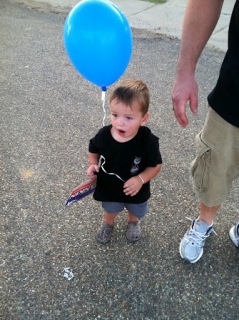 Never too young to support your local candidate! 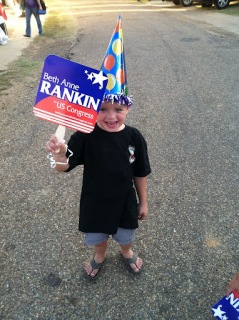 I have to close with the story of Owen’s party hat.  We walked in the fair parade for League and the boys rode in the wagon.  While we waited in the 100+ degree heat for the parade to start Owen found this party hat on the ground.  The float in front of us had a birthday party theme and evidently one of them had dropped their hat.  He picked it up and ended up wearing it throughout the entire parade, at the fair that night, and then to school the next day, and choir after that.  That party hat made for a happy boy for more than 24 hours!

Owen loves to sing at church and was excited to have the opportunity again last night.  Here’s a video of him singing in the Chapel Service before AWANA.

Aiden doing what he does best! He’s such a good eater and we’re thankful for that after fighting Owen at mealtime for the past 4 years. 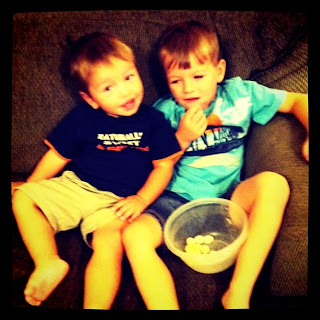 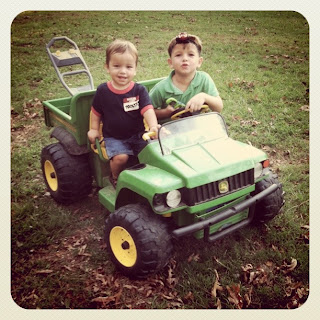 they drive all over the place together! It’s too cute except for when Aiden thinks he should drive and then a fight breaks out! {Owen is wearing a flashlight on his head} 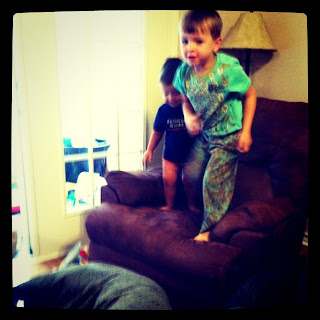 Jumping off the chair onto a pile of pillows = hours of fun! 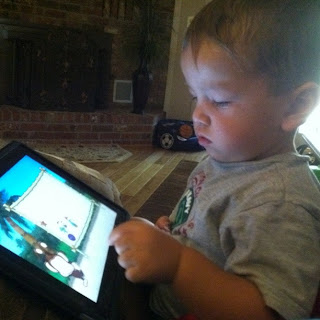 This kid is obsessed with the IPAD and my iPhone. He can work them like nobody’s business. Future Steve Jobs maybe? 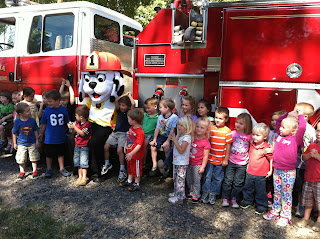 The firetruck came to Owen’s preschool yesterday and they learned to Stop, Drop, and Roll!
{Owen is in the green shirt to the right of Fire Pup }