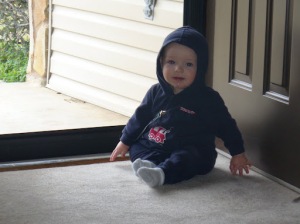 Waiting to go outside 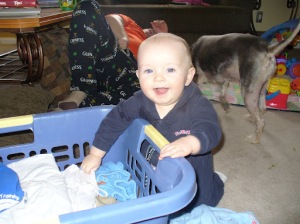 “helping” with the laundry 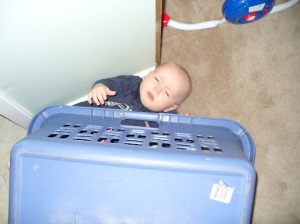 a mishap from playing with the laundry basket (he was mostly irritated with me because I was laughing so hard and I made him wait while I took a picture before I rescued him!) 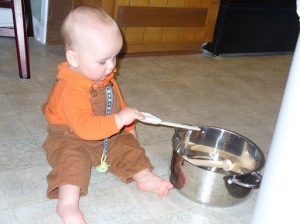 my solution to keeping him occupied while I cook 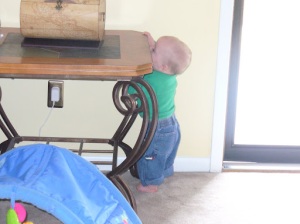 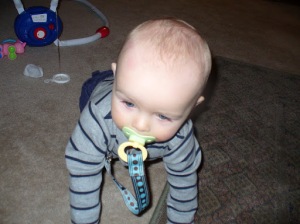 On the move!
So, we now find ourselves saying “why did we want him to crawl so badly!?!” It seems that he only spent one day content to crawl and now all he wants to do is pull up. I’m amazed at what he finds to pull up on. He’s bumped his head several times already and I find that I’m exhausted at the end of the day from trying to keep him away from the stone on the fireplace and the iron on the coffee table. What were we thinking when we bought furniture with so much iron?
Owen is 8 months old today! It’s hard to believe the time has gone by so fast. He’s so independent these days and his little personality is coming out. We are having so much fun. Just in the past month it seems that we’ve gotten to the really fun stage where he can play with toys and laugh and be silly. Every day is more fun than the one before. It makes all of those sleepless nights in the beginning so worth it to be at this point. Although I do miss my sweet little newborn at times!
Owen is still not sleeping very well but his eating has improved this week. We introduced meats over the weekend and he seems to like them. Today he ate all of his food and drank all of his formula which was a first. We also introduced a sippy cup over the weekend and he really seems to like it. He’s taken all of his juice and some of his formula from his cup and he seems to enjoy the new independence. Over the past 3-4 days he has really started talking more and more. He’s making lots of /g/ and /b/ sounds these days. He’s such a character! Tonight he discovered that he could stand up in the tub so now we’ve got a new problem on our hands. As I write this he’s waving a little mini golf club around and chatting Chris up about something very important. Stay tuned next week for a new and exciting Owen adventure!

Welcome to our blog! We’re new to this whole blogging business so bear with me until I get the hang of it. We know so many people who have blogs to document their baby’s life, their family life, their business, etc. so we decided to join the crowd. I never really thought we had much of interest to post in a blog until Owen came along. So, this one will be largely devoted to him. Since Chris’ internet ventures only include shopping online at Home Depot, Overstock, and sports websites, I’ll be the one posting and keeping everyone informed of Owen’s activities.
So here it goes:
Owen is officially 7 months, 25 days old….hard to believe that almost 8 months have gone by since he made his big debut! It seems like just yesterday he was just a small fry and we waited and held our breath that he’d wake up and look around for a little while. Oh how things change! Now, we wait and hold our breath that he’ll just go to sleep and stay asleep! Here’s his current stats:

growth: At his 6 month checkup he weighed almost 19 pounds. The doctor said he was in the 75th percentile for weight and the 90th for height (which is amazing since Chris and I are not what you would consider tall people). Recently, he seems to have put on some more weight because he all of a sudden feels very heavy to lug around.

eating: Owen started out being a very good eater but here lately he has decided that it’s not all it’s cracked up to be. He loves vegetables and will happily eat the variety that are available to him at this stage. However, fruit is another story. We bought at least one of each kind of fruit that is on the market and couldn’t wait for him to try all of the flavors and see which one was his favorite. After much trial and error (involving tears, clamping his mouth shut, turning his head, and one incident involving vomit) we can now say that he tolerates the apple/blueberry mix, peach/granola mix, pears, applesauce, and pumpkin/pear mix period. Everything else is met with fits and bad faces. He’s still eating his oatmeal cereal twice a day and he seems to still enjoy it. He’s decided formula is not quite as good as the liquid gold he was consuming for the first six months of his life so he has been a little particular about taking a bottle too. He’s apparently a night eater (much like his daddy) and takes 2 bottles before bedtime and then anywhere between 3-6 oz with each meal and sometimes in between. We’re going to introduce meats next week so stay tuned!
Development: Here’s where the little booger has really thrived so now it’s time to brag. He’s officially crawling! Owen had been inching along like a little worm for a few weeks but after seeing his friend Grant demo the correct way to crawl on Saturday night he can now crawl like a big boy. He decided Sunday afternoon was the time to debut his new trick and we were so thankful that he did it while we were both home. By Sunday evening he was crawling around on his hands and knees like he owned the place. Of course, Monday when Chris tried to capture this on video Owen decided it would be more fun to demo his belly to booty skills. So, now that he’s officially mobile we’re learning to see the house from his vantage point and apparently there are quite a few attractions when you’re 2 feet tall. Owen has now “read” all the magazines that used to be under the end table so he’s up on all the celebrity gossip. He’s discovered the VCR and the cords for the tv. He has also discovered that banging a block on the bottom of the coffee table can provide hours of fun! Owen and Emma are currently learning that possession is 9/10ths of the law. He thinks her chew bone is an Olympic torch and hiding her ball in his block bucket is such a fun game. He’s also learning to pull up and has decided that standing is way more fun than sitting so now the most common phrase that Chris and I utter is “bend!” as we try to sit him down. Chris lets him practice his walking skills every evening and walks him around the house which is Owen’s favorite game with daddy.
Language: You all should’ve known that I couldn’t end this blog without mentioning Owen’s fabulous language development. The SLP in me couldn’t resist! Owen is quite the talker (all the snickering and jokes that he’s just like his mama are not funny guys!). He seems to be especially vocal when he’s trying not to go to sleep. He jabbers away in the car and in the evening to try and keep himself awake. It’s too cute! Lately he says “dadadada” the most which delights Chris. His new favorite sound is this “yayayayaya” noise that he makes as he chews on things. He’s giggling all the time now mostly at Emma though. Chris and I make fools of ourselves trying to get him to laugh but Emma can just sneeze and elicit a round of giggles from the little guy.

So, to summarize such a long post, Owen is quite the character these days and we’re loving every second of it. I’ll add some photos to provide evidence of the statements made in this post when Chris gets home and shows me how to do it. Separately we’re not the most computer literate people but together we’re quite the powerhouse!

I’ll try to update the blog at least once a week so check back soon!