I still haven’t figured out how to rearrange the order of the pictures that I upload so this story is very out of order. Bear with me and enjoy the massive amount of pictures I added to this post. Owen turned the big 1 last Wednesday. We had a little cake after dinner on Wednesday to celebrate and then had his party on Saturday. He pretty much had a weeklong birthday celebration…but you only turn 1 once…so it’s ok. Looking back I realize that we bought 5 cakes….1 big one and 1 little one (for Owen) on Wednesday….another big one and 1 little one for his party…and another cake for his birthday photo shoot Saturday morning. We’re all “caked out” for the time being! Had I been able to rearrange the photos in the correct order this first picture would have been last. Again, bear with me and I’ll try to put the story in the right order. Here it goes….

A few shots of his birthday celebration…..

Owen was so nice to share his new toys with his buddy Hudson. I conveniently left out the picture where Owen smacked Hudson in the head with his new ball….they’re still working out the whole playing together thing.

Owen got lots of great gifts for his birthday. Amazingly for the kid who has everything…he didn’t get a single toy that he already has and there were no duplicate gifts. He truly loves each and every new toy that he got. He’s been a busy boy playing with all of them. Chris and I especially love his new piano and try to sneak in some playing time for ourselves. 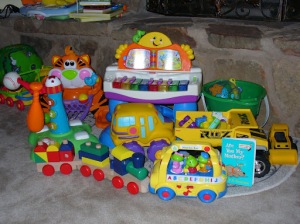 Owen got some great outdoor toys for his birthday as well. He really loves his new sand and water table. He can see it from the kitchen and bangs on the door when he wants to go out and play in the sand. 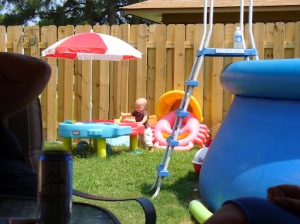 Owen was a little unsure of the cake at first…………..

he took a taste and then looked at me for confirmation……..

decided that was pretty good and dug in!

The sugar rushed through his system all at once and he started laughing and laughing!

His new swingset came the day before his birthday (thanks Grammy and Papa!) 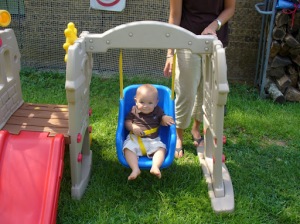 trying out the mini rock climb up to slide…….. 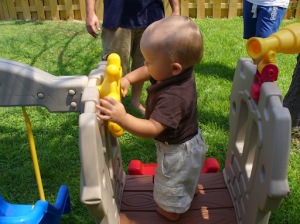 Owen had to have a little hair styling before his big day…his hair was starting to look like a mad scientist! We were holding out to see if he’d have some cute curls in the back but unfortunately he inherited hair that is straight as a board so a little grooming was necessary!

Owen had a great birthday and we all enjoyed spending time with Grammy, Papa, and Ashleigh (and Miguel). Owen goes for his 12 month well baby visit this Thursday so stay tuned for an update on his development. We’re already taking bets on what his weight is now. We’ve also got a Fourth of July Fireworks show to go to that night so I’ll be sure to post some pictures this weekend of our fun this week. Stay tuned……