It’s been awhile since I’ve been able to post anything. We misplaced our camera (still haven’t found it!) so I borrowed Melissa’s to take some photos of Owen’s latest antics. I’m doing two posts today….one of random things Owen has gotten into lately and then another post of his birthday fun. Hope you all enjoy!

For those who don’t know….Annabelle (my parent’s dog) has been living with us while they are displaced (a new word I’ve taken to using today!). Owen loves having a captive audience at snack time and the dogs love snack time b/c Owen is a good sharer (if that’s even a word!).

We now refer to this area of our living room as “the club”. Owen spends a lot of time in “the club” just doing random things. He takes toys, sippee cups, paper, etc. into the club. Other times he just sits there like he is doing here. He’ll sit there for long periods of time and when you look at him he just smiles. I know what you must be thinking…but he’s not sittiing there filling his diaper. He just likes to sit and look out at his empire! Notice that he’s removed the cushion from the dog bed for additional seating….in case friends come over!

It just cracks us up when he goes in there!

Now that he’s getting taller we’re having to re-babyproof the house. We are starting to worry that he thinks he’s a dog. He loves to bark, play with dog toys, lay on the dog bed, and really has a thing for dog food. This trash can in the laundry room has the dog food in it and he spends a lot of time over there fishing it out. The biggest tantrum that he has thrown thus far has been when we’ve gotten him out of the dog food. Notice how he’s standing on his tip toes to reach in…..scary!

All I ever hear is how much Owen looks like Chris and I’m fine with that…I’m a little sweet on Chris myself…I’ve got good taste! However, there are moments when Owen makes annoyed or exasperated faces that he is 100% me. 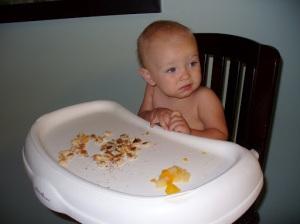 A couple in our Sunday School class makes these great little chairs and Owen got one for his birthday. He hasn’t quite figured out that he’s supposed to sit in it. He generally prefers sitting beside it and hitting toys on it. So, we’re working on it. It’s such a cute little chair and it’s the perfect size for his little booty!

Owen has long enjoyed playing in the potty water so we always closed the lid and that solved the problem. Unfortunately he’s figured out how to open the lid and put things inside so we’re having to close the bathroom door now. Once he figures out how to open the door we’re all in trouble. One day I found Batman floating in the water. With the high temperatures we’ve experienced lately, Owen decided Batman was a little too warm in the batsuit so he decided to let him take a swim to cool off.

As I mentioned earlier, Owen is incredibly taken with anything to do with the dogs. He really loves to carry the leashes around and even takes the leashes to the dogs or over to the door to let us know it’s time for our evening walk. 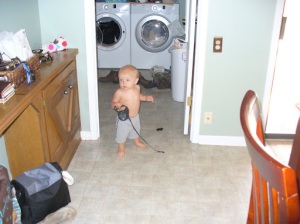 Owen has gotten to be such a big boy these days. It’s hard to believe a whole year has gone by already. He’s not a sweet cuddly baby anymore…he’s definitely the definition of “active toddler”. I think we’re going to stick with that label until the day the doctor confirms the ADHD that we’re all a little concerned about! Here’s a rare moment of Owen standing still………………………………………………………………….. 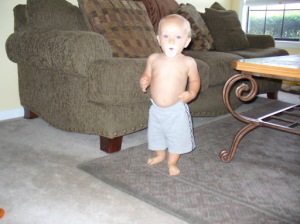 Never a dull moment these days!