Sorry that this is such a delayed post. I’ve had the pictures uploaded for over a week but I’ve been trying to work on rearranging them to put them in order. Apparently, my blogging skills are still lacking so I finally gave up. I’ve been too busy to work on it as much as I’d like. Just bear with me and hopefully it will all be clear as mud!

We took Owen to the park for the annual 4th of July fireworks show. They have music and food starting at 6 and then the fireworks are at 9ish. We went early for the music and food but cut out before the fireworks. I actually took Owen last year to the fireworks and he slept through the whole thing. Of course, he was less than a month old at the time….I know call DHS…that’s such a bad thing to do. Anyway, the weather was great and there was a good crowd and good music when we got there. Owen is quite the social butterfly and he wasted no time scoping out girls and new friends! He loves an audience and he really hammed it up for everyone. Here are a few pictures from our night.

Owen brought some of his new trucks to play with. He really likes this one that his Grandpa Ray got him for his birthday.

Owen took off walking toward the playground at one point so Chris went with him. He walked all the way over there like such a big boy. I thought this was a really cute picture of them together. 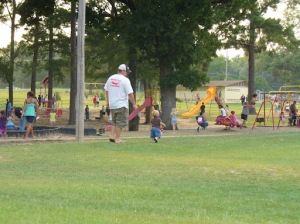 The Farmers Bank employees handed out fans to help combat the Southern Arkansas July heat. Owen really loved playing with the fan. He saw other people fanning themselves and started imitating them. At one point he took his fan over to an older man and they took turns fanning each other. He played with this fan for at least a week after the 4th. The kid’s got hundreds of toys but he’d rather play with a fan….go figure!

Owen showing off his new fan 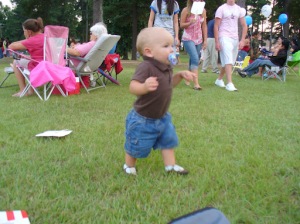 Here he is playing in his tent. He gets in here at least once a day. We have to check it for contraband every once in awhile. I’ve found shoes, clothes, phones, cameras, etc. stashed in the tent.

peeking out the window 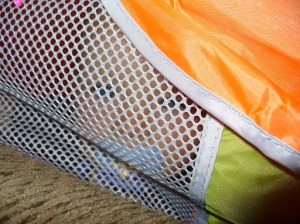 Owen loves the swings at the park 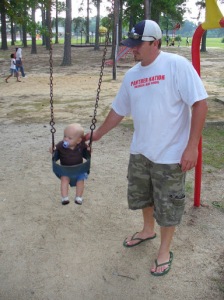 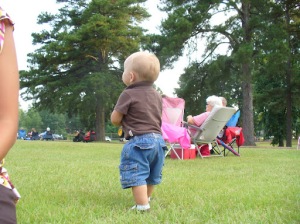 time to get dressed…Owen loves laundry and putting clothes into baskets and just playing with clothes in general. Today I caught him taking shorts out of his drawer and tossing them into his laundry basket.

breakfast! Chris made blueberry pancakes for us several mornings with blueberries he picked at Jean and James house. They were so delicious!

Nap time! Owen has gotten a little better about taking naps and will go to sleep on his own a lot now. He’s still taking two naps a day for 1-2 hours each time. He plays so hard that I can’t imagine him eliminating his morning nap any time soon.

He loves eating popsicles with daddy!

Hope everyone had a great holiday!