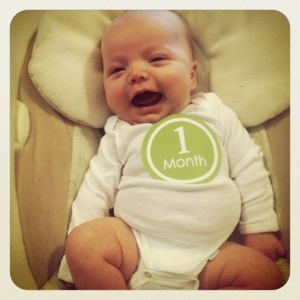 I’m posting this 1 month update on the day Evan turns 2 months old. Better late than never though! He goes next Monday for his well baby visit so I will post the 2 month update after that so I can include his stats.

At 1 month, Evan:
– weighs 10 pounds
– wears newborn and some 0-3 month clothes
– wears size 1 diapers
– still nurses primarily with 1-2 bottles given daily (4 oz)
– started going to Laura’s everyday since I had to go back to work on his 1 month birthday 😦
– wakes every 3 hours during the night to eat
– has no set wake/sleep schedule during the day
– starting to smile and saves his best smiles for his brothers (especially Aiden)

We certainly have no set schedule or routine at this point. We’re just trying to get through each day and know that at the end of the day they’re all happy, healthy, and accounted for! Since I had to go back to work so early we’ve been a little overwhelmed. Evan doesn’t quite know what to make of Laura’s and stays awake most of the day there because he can’t quite relax. He has also started screaming in pain frequently after he’s fed and the doctor says its colic. For my memory I want to document that we tried mylicon drops, Colic Calm, and even onion water (google it – you’ll be glad you did). What ultimately worked for us was Lifegest (made by First Fitness Nutrition). This has helped his digestion immensely!

He is still the most squeezable and snugly baby you’ll ever see. We love to sit and rock him and snuggle every night after the big boys are in bed.

This first month has been a wild ride but we can’t imagine our lives without our sweet cuddle bug!