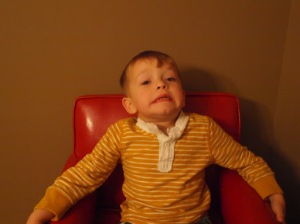 Apparently at some point in the third year of life, we learn fear and our imaginations grow by leaps and bounds. These two make for a lethal combination when it comes to entering dark places and going to bed at night.
Owen has claimed that there were sharks under the bed, brown dogs were going to get him, snakes in the leaves outside, and on and on. Fortunately, a little reassuring usually does the trick. I have to giggle a little when he claims brown dogs are after him. Where does he get this stuff!?!