Christmas was fun and hectic this year. Chris and I always go shopping the day after Thanksgiving to get all our Christmas shopping over with in one day. It’s fun and crazy and we do good keeping ourselves on budget but apparently we don’t keep track of the quantity of stuff that we get because this first picture is just ridiculous. Can you say overkill!?! In all honesty we didn’t spend that much money because (Praise the Lord!) Owen’s at an age where the things that he wants are super cheap. His favorite Christmas toys are his horses and farm animals that cost less than 10 dollars. I’m certainly not looking forward to the days where he wants expensive shoes, video games, etc.!

What Aiden thought of Santa’s visit…LOL!

Checking out his Black and Decker tool kit that looks just like daddy’s!

The main attraction! On a side note, I know I look horrendous in these pictures but I don’t know how to Photo Shop myself out so forgive me. Bear in mind that I had had major surgery exactly a week before Christmas so I was doing the best I could…HA! 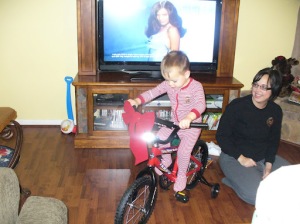 Owen and Aiden got matching hats and mittens.

Playing with his beloved animals…

trying out his new drill….

After we looked at what Santa brought, Owen opened gifts from Grammy and Papa and Stacy, Jacob, and Ashleigh. Notice he’s using his new drill to “open” his gifts. This took forever!

Another shot of his beloved animals…he sleeps with these every night!

Some of Aiden’s gifts…he’s under the blanket in the bouncee seat in the background…doesn’t he look excited!?!

Chris and I look like super models in this one but I put it in to show the kids matching Christmas pajamas that I’m so proud of.

This christmas was definitely the most fun so far since Owen has gotten to the age where he really gets into presents and Santa. It was also exciting since we were celebrating Aiden being 1 week old! Next year will be extra crazy with a 3 year old and a 1 year old….better start saving now!