I just wanted to take a minute to document Owen’s favorite things as an almost two year old. So, here it goes…..

1. slides…..or SIIIIIEEEEEDDDD!!!!!!!! as he calls it and he can make anything into a slide. One Sunday morning when we picked him up from the nursery we found him sliding down the back of an overturned chair. He also enjoys removing all the cushions from our living room furniture to create slides. 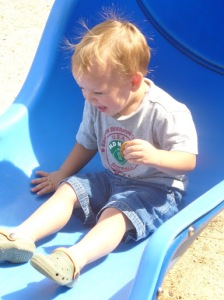 2. Animals….particularly dogs, horses, and cows. He can identify lots of animals and tell you the sounds they make but those three are definitely his favorites. He and poor Emma have a love/hate relationship most days. She can’t get a moment of peace when he’s around. He just loves her to pieces (literally) and wants to hug and kiss and play with her at all times. I try to remind her daily that she’ll be rewarded in heaven for her tolerance and patience with him.

3. Tools……Owen is a little Bob the Builder in the making. He loves playing with tools and can occupy himself for long periods of time “fixing” various pieces of furniture in the living room with his vast array of tools.

4. The alphabet….we’re so proud that he can identify all the letters of the alphabet and he loves to quiz other people on the letters. He’s learning the letters that make up his name and has a particularly funny way of saying “w”.

6. Hugs and kisses or “awwwweeeee’s”….Owen is a very lovable little guy and will stop to give any person, animal, or toy an “aaawweeee” when he thinks they need it whether they want it or not. A few weeks ago I caught him smooching the young girls working in the church nursery before he said his goodbyes.

7. swimming…..he hated swimming lessons but loves the water and swimming. He’s got the Puddle Jumper floatie this year which allows him to be independent in our pool and he’s in heaven. He just kicks those legs and goes all around the pool. We can’t wait to go to the beach in a few weeks to let him swim at the hotel and the beach.

8. coloring….particularly with markers. He asks to color several times a day and is very particular about which coloring sheet he wants to do.

9. balloons and umbrellas……an unhealthy obsession! We have witnessed many meltdowns over these two things and have been known to “borrow” balloons from different events to avoid a meltdown. I once had to cut the string of a balloon that Owen fell asleep with a death grip on just to avoid a meltdown. He’s broken two of my umbrellas trying to open them in the car. Needless to say he will be in absolute heaven on Saturday when he gets to have a lot of balloons at the house for his birthday party.

10. his daddy…..his hero. Owen wants to be just like Chris and has been pretty successful thus far with this mission. He follows Chris around outside “helping” him work in the yard and he repeats any word or action (including sneezing) that Chris does. It’s the cutest thing ever to see the adoration he has for his daddy. The most recent example of this love and adoration can be seen in the picture below…….

…..Chris has the typical “white guy” tattoo of barbed wire on his bicep so Owen attempted to copy that with his markers!

So, there you have it….Owen’s Top Ten Favorite Things. We’ve got Owen’s 2 year birthday party this Saturday, his actual birthday next Thursday, and then vacation the week after. Stay tuned for lots of updates of our fun with our sweet little guy.

One thought on “these are a few of my favorite things…..”