Owen has a few weird obsessions that we’ve discovered here lately. One of the weirdest is his thing about umbrellas. He goes crazy when he sees an umbrella and he’s already broken two of my umbrellas by insisting on holding them. That’s another post all by itself because he doesn’t get the connection yet between umbrella and rain but I’ll save that for another day. Owen’s sand/water table has an umbrella on it that we normally keep closed because the wind just kills it. He was insisting on opening it the other day and I kept putting him off. Stephanie came to pick up Reece and I had my back turned talking to her so when I turned around this is what I saw….. 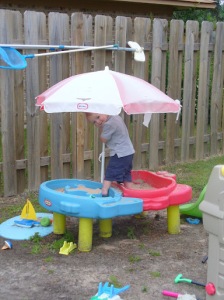 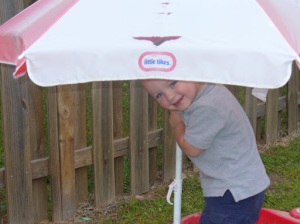 One thing you can say about Owen is that the child doesn’t give up…..EVER! He stood under that umbrella for a long time until I physically removed him to get him to come in for dinner which didn’t go well and leads me to my next post…..