We have had a lot of fun spending time together over the Christmas Break. Here are a few more miscellaneous pictures of our time together:

Owen loves his Elmo Live! He particularly likes to push him down to hear him ask for help getting back up. This may be teaching him a bad habit, but we’ll see.

What the living room looks like if Owen is left to his own devices while I’m in the kitchen cooking…….

I was in the kitchen cleaning up after breakfast the other day and when I peeked out I found Owen sitting in his little chair up on the fireplace. For some reason, he loves to be up off the ground….whether it’s doing flips, jumping on the couch, or laying on the coffee table…it’s so weird and can be highly aggravating. 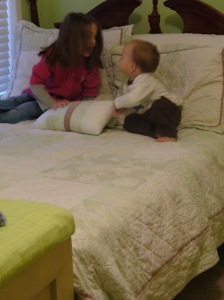 Chris has made pancakes several mornings over the break. Owen definitely loves his pancakes!

I tried to catch Owen wearing some of his new clothes before church last Sunday but this was the best I could do. He looked so handsome in his new clothes and shoes. He loves going to Sunday school to sing songs, learn about Jesus, and play with his friends. 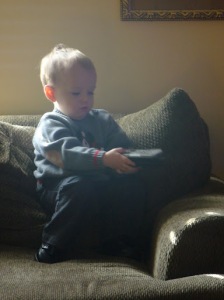 Some friends of ours gave Owen this bouncing zebra last week. He looks so funny bouncing and spinning nonstop. I caught him wearing my pink razorback hat while he was playing. Chris was so proud 😉 I had to add a few pictures!

Owen has also taken a liking to Emma’s dog bed. He drags that thing everywhere like it’s his own portable seat. Tonight, he put it up on the coffee table and climbed up there to lay on it. He has really kept us entertained lately with all his new games and tricks. 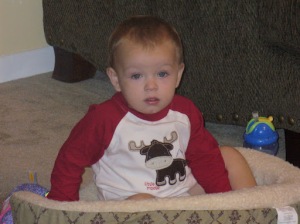 It’s so hard to believe that another year has passed. At Christmas last year, we were so proud that Owen could sit up on his own. Flash forward to this Christmas and Owen is running, climbing, and jumping. It’s amazing how fast they grow and develop. 2008 was a year of firsts for sure. We experienced first steps, first words, first blackeye (and surely not the last), a first birthday, and lots of great memories. 2008 had its ups and downs but we are definitely blessed beyond measure and looking forward to what this next year will hold.
Happy New Year!

One thought on “Christmas Break”