I resolved over the weekend (as I was tearing into a hamburger at Mulegate) that I had to get back to exercising this week. So, I promised Owen that we would walk to the duck pond at SAU and feed the ducks today. I seem to have forgotten how far the duck pond is from our house! As I was pushing the stroller up the hill for all to see as they whizzed down University St., I contemplated how out of shape I have become. At 8 months pregnant I could walk 3 miles without breaking a sweat. Now, 15 months post baby I can’t even walk a half mile without huffing and puffing. Needless to say there will be more exercise in my future!

The weather was so nice this evening and Owen enjoyed riding in his stroller and talking to people as they passed us by. People really get a kick out of him hollering at them in “owen-ese” and he always finishes his monologue with a friendly “hey!”. Some of the meaning gets lost in translation but I’m pretty sure he was telling them “yeah, that’s my mom…don’t worry about her…she always looks like this when exercising….something about too much ice cream and chips….she obviously needs to be doing this!”

We got to the duck pond and all the ducks immediately came out of the water to see what we had to offer. Owen was in shock to see that many ducks coming toward us……

then he became very amused at all the quacking

I fed the ducks some bread while Owen sat in the stroller and then once I earned their trust I unleashed the little man….

I gave Owen some bread but he just threw it on the ground right at his feet and the ducks were smart enough not to fall for that trick! So, I threw the bread and the ducks would come forward to eat it, then Owen would chase them back toward the water. This cycle went on for quite some time. 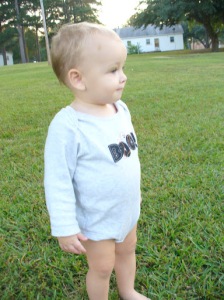 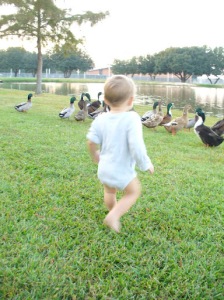 He was not happy with me when I told him it was time to go. As I huffed and puffed pushing the stroller back to the house, I promised him we’d go back everyday until mommy was back in fighting form or until I do collapse a lung…whichever comes first!