It’s officially fall and while it may not feel like it yet in the South, we are enjoying all of our favorite fall activities. We have had a very busy September. We went to the county fair, the first football game of the season, and my 10 year class reunion. It actually “felt” like fall for fair week so we broke out the fall/winter wardrobe only to put it away again the next week when temperatures hovered around 90 degrees. That will explain why Owen is wearing fall/winter wear in some of these pictures and summer gear in others. If you don’t like the weather in Arkansas, just wait because it will change!

I’m still a terrible blogger and haven’t figured out how to upload pictures in any particular order so I’ll do my best to keep these connected.

We were so excited to take Owen to the fair this year since he is finally old enough to enjoy it. He loves fish, fries, and hushpuppies and they had a great group selling them at the fair. This first picture is Owen and Nonnie eating fish. He looks sleepy or drugged in this picture, but he’s actually just mesmerized by the carousel that we were sitting in front of. He was in a trance staring at it the entire time we ate. It worked out fairly well for us though because he actually sat still and ate a decent meal!

looking for trouble before we ride the carousel….. 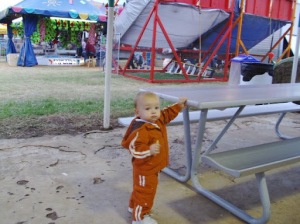 Owen had a great time riding the carousel and was such a good boy for the whole ride. He loved holding onto the pole and watching the horses around us go up and down. He started getting a little tired of it right at the end but then he cried when it stopped. So, all in all, it was a successful ride!

Owen got to wear his new Panthers football jersey to cheer on the Magnolia Panthers at their first home game. I couldn’t get him to cooperate for a photo without giving him something to hold so unfortunately the water bottle is in the way of a great shot. Owen loved the football game and clapped any time anyone in the entire stadium clapped (even if it meant the other team had scored!). He also spent some time waving at the cheerleaders. He really enjoys the band (especially the percussion section) and enjoyed the halftime show. We left after halftime and he went for a slumber party at Nonnie and Papaw’s so Chris and I could head to my class reunion.

We took Owen to the park for the family picnic portion of the class reunion. He enjoyed running and playing with the other kids. He loves the playground and immediately takes off running towards the swings and slides when his feet hit the ground.

We also went to the fair parade. We had to keep Owen happy with some cheese crackers while we waited for it to begin. He scouted out some little kids sitting on the grass eating the same crackers and plopped himself down in the middle of them (he practically sat on the little boy to make him move over so that he could sit next to the two girls….Chris Green, Jr. anyone!!).

His favorite part of the parade was when the marching bands passed us. He was still looking for those drums after they were long gone.

Uncle Josh drew the short straw at work and ended up in the parade (he’s Smokey the Bear). 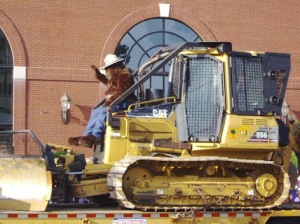 We tried to get Owen to pose in front of this cute display at the fair by himself for a photo. There was a scarecrow in the display that he didn’t like the looks of so I had to stand with him. This is the best picture of all those we shot and Owen has his eyes closed. I included it anyway because I think his little track suit is so cute!

We made a stop at Old McDonald’s farm at the fair and Owen really enjoyed looking at all of the animals. His favorite animals were the pheasants and the roosters. After a rooster “cockadoodle dooe’d” at him, he spent 20 minutes jabbering to the rooster in Japanese. He “talked” to all the birds and also pointed his finger at a goat and told it to “Sit!”.

We all had such a great time together at the fair, parade, reunion, and football game. We’re looking forward to all the fun October will bring!