So, here’s how a typical week goes in Arkansas this time of year:

Here is Owen on Wednesday………. 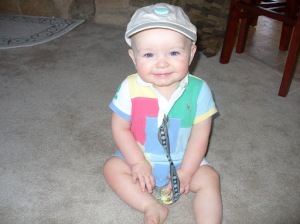 and here is the weather today.

It was 72 degrees on Wednesday and today it’s a balmy 34. It snowed most of the day but it has stopped now. Tomorrow’s forecast calls for sunny skies and a high of 50 degrees. Gotta love the south!

Owen finally grew into his Luc Leafwalker ride on that his Grammy and Papa got him way before he was born. He’s had a great time riding it all week and trying to eat his antennae.

We’ve instituted an evening snack time to introduce him to more crunchy foods and to allow me a free moment to clean up the kitchen and living room while Chris plays his stinkin’ XBOX (can you tell I’m about to throw the thing out the window!?!). Owen loves snack time and as of yesterday…so does Emma! I caught Owen reaching down and sharing his snack with Emma last night. I’ve been giving him the Biter Biscuits which apparently dry into concrete on his face, hands, the high chair tray, his clothes….you get the picture. I have to sit him in the sink to hose him off after he’s finished which he finds amusing.

Hope everyone has a safe and fun weekend! Stay tuned for a new post at the beginning of next week!